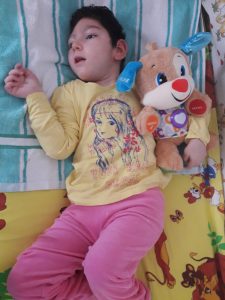 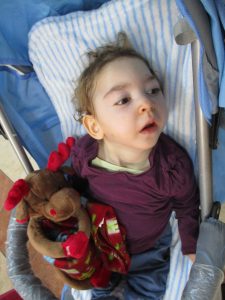 Clara and Tania, two of the members of Saint Andrew’s extended family of care are dearly beloved by our team of specialists and by their peers, and have fans and supporters from our local community of friends and from far away, in UK.

The latter, her big-hearted UK supporters, always make sure to send inquiries about the children’s needs and ask about their well-being and enjoy sending very-much needed and considerate gifts like beautiful clothes and sensory stimulation toys that brighten children’s days and please their hearts.

This week a nice and well-thought surprise arrived at the Centre, a parcel containing gifts for Clara and Tania. The gift included waterproof cotton bedclothes, decorated with cute flowers, rain drops and stars for Clara’s bed which is a smaller size than the other kids’, so she needed the fitted sheets, and Tania received a multifunctional toy, a soft and colourful puppy that sings and lights up. The puppy will keep her company and will be used during Tania’s sensory stimulation session, an important and useful tool for our specialists. The puppy sings over 20 fun songs and Tania is familiar with some of them so when the puppy plays the tunes, Tania’s interest is immediately piqued. The puppy’s tummy or paws light up and Tania gets to pet the soft plush toy and clap when another part of the puppy lights up. She is enthralled by the fact that her new friend is soft and fluffy, and she enjoys running her hands on its back.

Saint Andrew’s team would like to send lots of gratitude and their appreciation towards the incredibly considerate UK sponsor for the care and incessant involvement in the children’s lives.

The girls also send their love and warm hugs to their far-away friend.