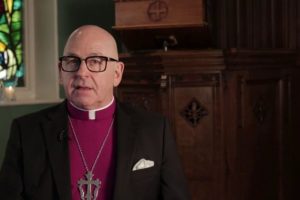 We are extremely honoured to be chosen by the Diocese of Glasgow and Galloway for Bishop Kevin’s Lent Appeal 2022.

St Mungo and St Ninian are respectively depicted on the left and right sides of the Diocesan shield.

On 9 January 1492, the Bishopric of Glasgow was raised in rank to be an Archbishopric. During the Scottish Reformation, the heritage and jurisdiction of the church passed into the hands of Church of Scotland. However, the small Scottish Episcopal Church continued the line of bishops of both dioceses, even though, in the 16th century, many of them held the office in title alone.

In 1697, the Diocese of Galloway was united with the Diocese of Edinburgh, and in 1708 the line of Archbishops of Glasgow fell vacant. At that point, episcopacy was abolished in the Church of Scotland and Episcopalians separated from the State church. The penal period in the 18th century, when the Episcopal Church was outlawed because of its adherence to the Stuart cause, was a low period for both Dioceses.

The line was revived with the appointment of Alexander Duncan in 1731 as Bishop, rather than Archbishop, of Glasgow. However, when Duncan died two years after his appointment as bishop, the see fell vacant once more. In 1787, William Abernethy Drummond became Bishop of Edinburgh and Galloway and Bishop of Brechin in a temporary personal union of the dioceses.