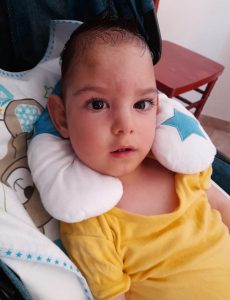 It’s been a month since our announcement that St. Andrew’s family was welcoming a wonderful, beautiful and smiley young boy, called Mihnea

When Mihnea came to our center his hair was long and unkept as his Mum and Gran could not take care of his hair or organize his first haircut ceremony, one year after the baptism, as it is customary in our country. Because he was sweaty all the time and his hair had to be pulled in a ponytail, but also because it is a Romanian tradition, two colleagues from the medical staff discussed the matter with the Mum and Gran and asked for permission to organize this special ceremony for Mihnea.

The event took place over the weekend and was set up in detail, and all traditions were respected, Mihnea was nicely dressed but he also received new clothes which he will wear in the future. We prepared a delicious vanilla and chocolate cake inscribed with his name and decorated with white, green, and blue. As the tradition dictates, the Godmother and Midwife placed various objects on a tray and Mihnea was invited to pick three objects.
Additionally, during the first haircut ceremony, when several strands are cut a bakery roll is broken and shared among participants.

Izabela participated with all her being, she paid attention to the entire ceremony and could not leave Mihnea’s side, as if she wanted to make sure he was well. Towards the end of the event Mihnea had his haircut and he seemed happy to leave behind his long hair during summer’s torrid days.

Good luck, Mihnea, we are glad that you got used to your new family at St. Andrew’s centre and that these events have created stronger bonds between you and the medical and care staff, from now on, your extended family. 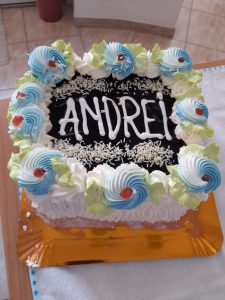