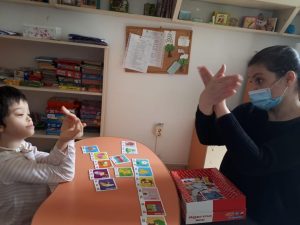 Izabela was born into a family in which her parents and grandparents are deaf-and-dumb. She also inherited this disability, hearing very weak with one ear, with the other not at all. Iza does not speak and because she has a tracheostoma, she can’t produce any sounds. To help her orient herself as well as possible in space, Iza was hearing aided from an early age. In parallel, a person was sought to teach her to communicate through sign language. For a long time, a suitable person was not found. To help her, the specialists from the centre worked with her, taught her basic things, to imitate, to make joints, puzzles, to play with the ball, in general to enjoy any game and toy. But the regret remained that there is no person to teach her to communicate by signs.

Recently, with the help of the specialists from Child Protection Department Arges (especially Iza’s case manager), who were interested in how they can support / help Iza, a collaboration was made with a colleague-therapist from another centre, a deaf-mute person, who comes to St. Andrew’s twice a week to initiate Iza in the secrets of mimic-gestural language.

At first Iza, not knowing this person, did not want to cooperate, she got tired very quickly when she had to pay attention to what the therapist taught her, the imitation was rude, she could not imitate the shown movements, she had to be helped to imitate a movement and generally she didn’t understand what was going on around her.

After a few sessions Iza is already new girl. She got used to working with this new therapist, she got used to the program, she participates in the meeting, she doesn’t get bored anymore, she imitates all the movements shown and she is doing it better and better. The therapist tries to teach her the colours, animals and basic objects like trees, flowers, birds, tables, etc. Everything that is shown to Iza must be repeated many times, because she does not remember from one session to another what she is taught.

The important thing is that Iza collaborates, that she is interested in the sessions with the new therapist, that she imitates and, slowly, easily, repeating, we hope to learn to communicate more easily with those around her.