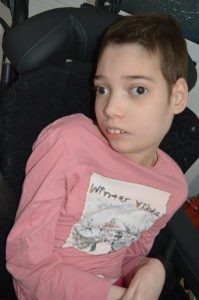 With the deepest regret and sadness, we said our final goodbyes to our dearest Valentina who passed away in the second week of November, after a long and hard fight for life.

This news brought us so much sorrow as we were forced to say farewell to the child we raised since she was only 15 months old.

After a long period when Valentina went through repeated hospitalisations her condition deteriorated and she became more fragile and finally her heart stopped beating despite the sustained efforts of a dedicated medical team of specialists.

Following the efforts made by our medical team, during her final days her health seemed to be stable but in the blink of an eye everything changed radically so that the Centre’s team had to call for the intervention of the paramedics after Valentina’s illness took a turn for the worse.

Her parents and the Centre’s staff were permanently in touch with the hospital doctors which took all the necessary steps to improve her condition.

We were all by her side until the very end.

The parents decided to organize the memorial and took care of everything in detail, so it went smoothly. The St. Margaret’s team of social workers offered their support whilst carrying out all the necessary legal steps, and some of the care staff accompanied Valentina on her last journey.

With heavy hearts, on November 9, her parents, family and devoted caretakers, who were by her side during her childhood days, wished her a smooth journey to the heavens above!

You will forever be in our hearts, Valentina!