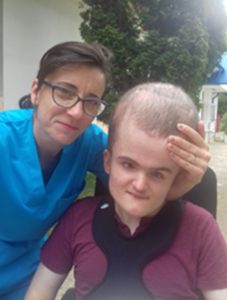 Madalin is a 21-year-old young man who came from a disorganised family. His parents placed him in foster care immediately after his birth in Valcea city.
In September 1999, Madalin relocated to St. Christopher’s Centre in Curtea de Arges, Sasului Valley. His Gran used to visit him on a regular basis and seldomly his Mum.
Madalin was used to not reacting to stimuli and he was not paying attention to what was happening around him. Gradually, with a lot of work, he started to focus on people in his proximity, recognise familiar places, gaze at children’s books, eat mashed foods and hold his own bottle. Later, Madalin started to eat waffles and other foods that melted easily in his mouth.

In 2003 Madalin, together with the children from St. Christopher’s Centre were relocated to Pitesti at St. Andrew’s Centre.

During the winter season of 2004, Madalin was taken to Cluj, at the Neurosurgery Hospital, where his hydrocephalus was operated on and the doctors placed a shunt. The costs were covered by Children’s Smile Foundation. The surgical intervention was successful and Madalin’s condition stabilized. At his 2-year check-up at the hospital the doctor was pleased with the results and with his development.

Madalin grew up and now he requires periodical medical check-ups to monitor his condition. In May 2019 he went to the same doctor in Cluj where he underwent the surgical intervention several years ago, namely at the Neurosurgery Clinic of the Cluj Emergency County Hospital. The specialists performed a set of blood tests, a CT scan and the results indicated that Madalin does not require further intervention, his shunt doesn’t need replaced nor does the draining tube. The doctor was delighted with Madalin’s evolution and with the fact that his cranial perimeter increased with approximately 10 cm.
Madalin suffers from triventricular hydrocephalus, severe developmental and language delays. He is able to react to familiar sounds using hand gestures, he participates in games that use colourful lights, sounds, games that enhance and enable communication, motor games, association games, puzzles and building blocks.
Madalin is a happy child, he prefers certain foods and avoids white ones and prefers mashed purees. He likes to walk around the courtyard by himself using the wheelchair and a safety strap, to explore the surrounding spaces and admire nature’s wonders. During the summer months the centre’s specialists perform sensory stimulation games in the centre’s courtyard and Madalin always demonstrates his enthusiasm when he is asked to get involved in the proposed activities.

Madalin is emotionally attached to one of the medical nurses, Violeta, and the duo share a special friendship. They met back in 1999 at St. Christopher’s Centre when Madalin was only a couple of months old. A nice relationship based on trust and respect flourished along the years. At times Violeta asked the management to take Madalin back at her home so that he could enjoy a family like environment.

In 2003 Madalin and other children were relocated to Pitesti, at St. Andrew’s Centre and Violeta accompanied him. Madalin and Violeta’s friendship continued unhindered.
Starting with March 2021 Madalin is no longer a resident at St. Andrew’s Centre, he left Violeta and his chums behind together with the best memories of his life. He turned 21 and the Arges Child Protection Department representatives decided to relocate him to a Pitesti youth centre designated to his particular needs.
Madalin has been a part of our Foundation’s family of love and care since 2003 so the separation has been a difficult process to say the least. To help him get used to his new home Violeta decided to visit him regularly and take him for walks in the centre’s courtyard. Additionally, his relocation included moving his favourite bed and his sensory stimulation toys, the wheelchair, blankets and all his clothes and belongings.
The accommodation process is challenging as Madalin has been residing at St. Andrew’s Centre for a long time, he was used to his routine, to having the same people around him, to spending time with his ward chums, his actual family, to his type of tailored care and diet, to enjoying the friendly and warm atmosphere that used to surround him at all times.

During the last weeks, the medical staff from the Pitesti Centre kept in touch with St. Andrew’s staff to make sure he is positioned correctly in his wheelchair, that his particular dietary habits are understood and respected, that his medication is continued per the doctor’s recommendation, and that Madalin is helped using the same gestures and routine so that he feels welcomed and safe. In time we hope Madalin will get used to his new home, staff and colleagues and that he will understand that his new family includes people that wish him the best and would like to see him thrive and reach full potential.