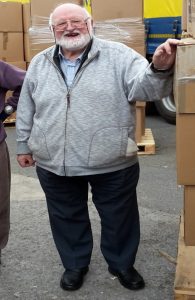 Eddie Errington ~ even writing his name it is a struggle to do it without thinking of him and giving a smile.  The twinkle in his eye still lives on and as a charity about to start our 30th year anniversary celebrations it would be seriously amiss not to attempt to do justice to his memory.  The question was how…. Eddie was a true unsung hero who did everything for his kids (both literally and metaphorically) and did not seek any kind of glory or recognition that came from the smiles and love from the children and people of Romania.  Inspired from the start with his great friend and founder of Children in Distress Dr John Walmsley Eddie was driver/co-pilot of the first mercy lorry that made its way to Romania.  A treacherous and very different journey in 1990 than the one we take today with our Shoebox campaign and other shipments.  Those that know Eddie (and even those that did not) would say SatNav is a modern day miracle!

As part of the Charity’s 30-year celebrations two of our supporters from the North East, (and one of our charity Trustee,) John Burns and Bryn Clode are planning to recreate one of the aid runs following a similar route to the founding days of the Charity. They will be driving winter aid across to Romania.

If you are able to either, support us financially or know a company that could help with this fund raising venture, in memory of Eddie Errington that would be fantastic. We are looking for donations to cover the cost of fuel, ferries and expenses, or to sponsor as many miles of the journey at £1 a mile as you feel able. By doing this we hope to cover our costs and raise up to £5,000 towards the work in Romania.