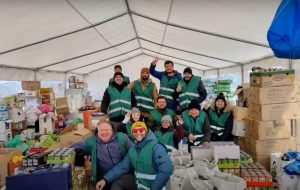 “We departed Saturday at 6 a.m. from Bucharest, in a caravan of two vans and six private cars.

“Gratefully, several wholesale food producers and markets contributed goods of all sorts. The trip to the border of Isaccea took four hours, in snow and icy roads, with a bitter wind. Isaccea is on the Romanian side of the Danube, which separates Romania from Ukraine. At Isaccea refugees cross on an open ferry from Ukraine to Romania, a one hour freezing ride. Then the ferry returns to Ukraine to pick up more refugees and bring them to Romania. It is quite an impressive humanitarian operation.

“The ferry doesn’t return empty to Ukraine. Prior to arriving at Isaccea, our caravan deposited approximately 3 tons of supplies for transport to the Ukrainian side. Over a third of the contributions came from CiD.

“Once the refugees exited the ferry, the goods were loaded onto the ferry and taken across to Ukraine. There, normal, everyday Ukrainians loaded the supplies into their cars and drove them to distribution points. The ferry also carried men returning from wherever to support the Ukrainians in the conflict.

“At the Isaccea border, we deposited medical supplies with the ambulances, then settled in for a wait for our instructions. Our group was assigned to be the welcoming committee, I think because we had a range of languages. We waited at the border, and after the refugee’s cleared immigration, we walked them and their bags (usually only a backpack and rollbag, sometimes just a few plastic grocery bags packed in haste) and sometimes pets. We first took our guests to a hot food center, which also had pet food and pet carrying boxes. We then escorted the refugees into tents to arrange the next step of their journey. Most do not plan to stay in Romania but wish to get to family and friends in western nations.

“There was an officiant registration system for transporting the guests to various destinations. Our caravan was assigned with passengers who wanted to go to Bucharest, then further. The CiD van was assigned six people from Odessa – a grandmother with cane, her two grandsons, and a separate mother, her daughter, and her sister.

“We drove our guests back the four hours, to Bucharest, to a refugee center in Bucharest run by a wonderful Romanian Orthodox parish. The refugees spent the night, and very early Sunday morning we took the grandmother and her grandsons to the train station and connected them to a bus to Istabul, where they have family. Our other three passengers wish to go to Italy, where they have family, but we were not able to arrange transport on Sunday. Today we managed to arrange transportation to Italy to all the refugees our group brought to Bucharest.”