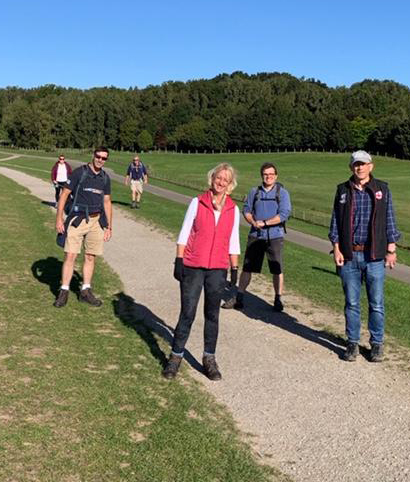 Every September for the past few years a valiant team from St. Lawrence Church, Seal Chart in Kent have taken part in a Charity Dragonboat Race on Bewl Water to raise funds for the charities they support, including Children in Distress.

This year was different of course, and this event could not happen, so they had to think outside the box for a sponsored event to raise much needed funds for the charities.

The church PCC came up with the idea of a ‘Walking Dragonboat’ and set out to find volunteers to walk (suitably distanced of course!) the 20km (13miles) walk around Bewl Water.

On September 5th, an enthusiastic group gathered at the lake. They were extremely lucky with the weather (in the preceding rainy days they had wondered if they would get wetter on the walk than they had on the water) and a great and fun time was had by all.

Due to generous sponsors they were able to donate to several charities and, as one of the three main beneficiaries, Children in Distress has received £1000.

Thank you to everyone who organised, took part in, and sponsored this event!